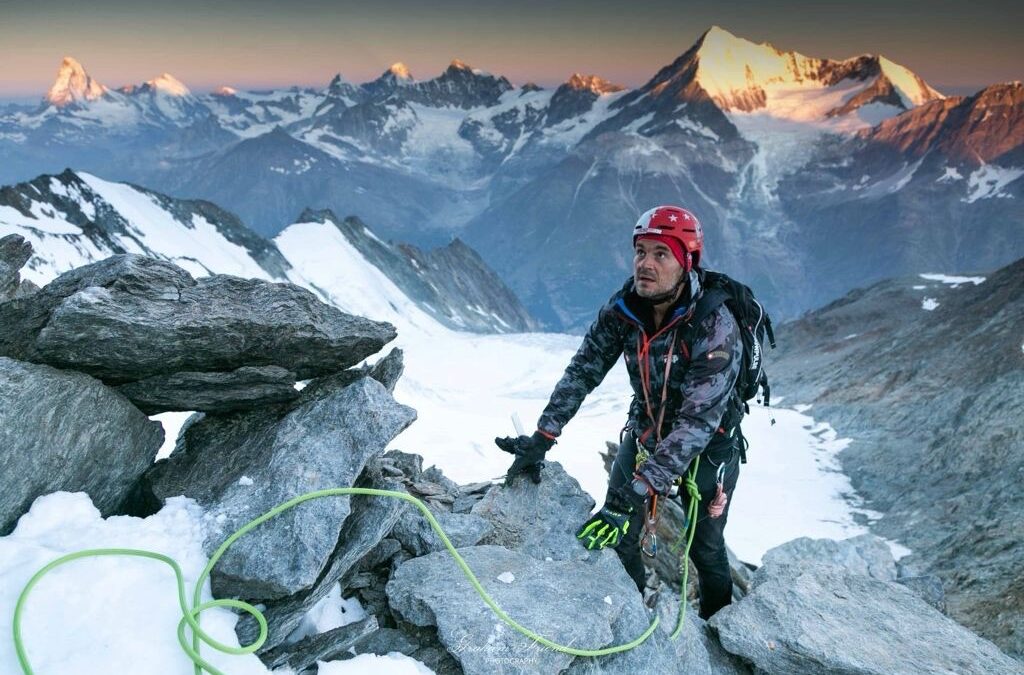 With just the Breithorn (4.164) under my belt, I can only be considered a novice in mountaineering. Unlike my mountaineering partner Graham Friend who has climbed 44 of the 48 Swiss 4000m peaks. I much welcomed the opportunity to join Graham on his attempt to summit the DOM, the highest Swiss mountain exclusively on Swiss territory.

We set off from Randa (1.400m) on the valley floor to climb to the DOM hütte at 2.936m. The first part of the climb through the forrest went steep up and included worlds longest suspension bridge , spanning close to 500m. The second part of the climb went over rocky paths and included a long ‘via ferrata’. According to the guide book, it’s a 4.5 hour climb, which we did in 2h40m. After our arrival at the hut, we decided to recce the first – rocky – part of the climb, to get acquainted with the start of our summit attempt the following morning at 3am. 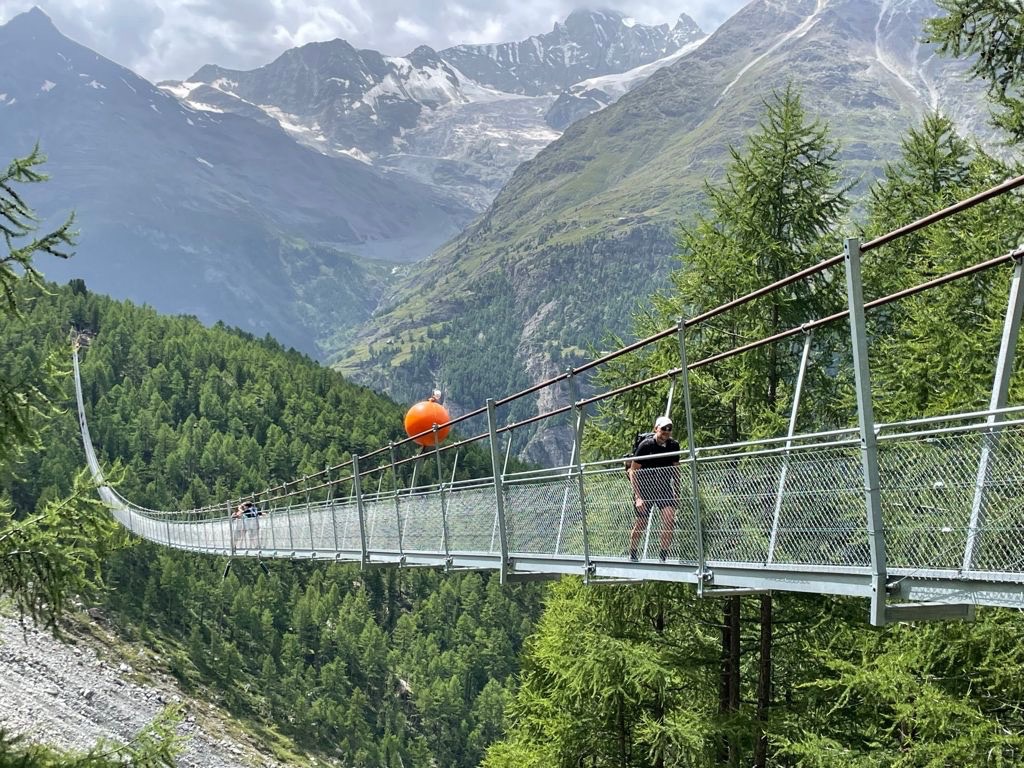 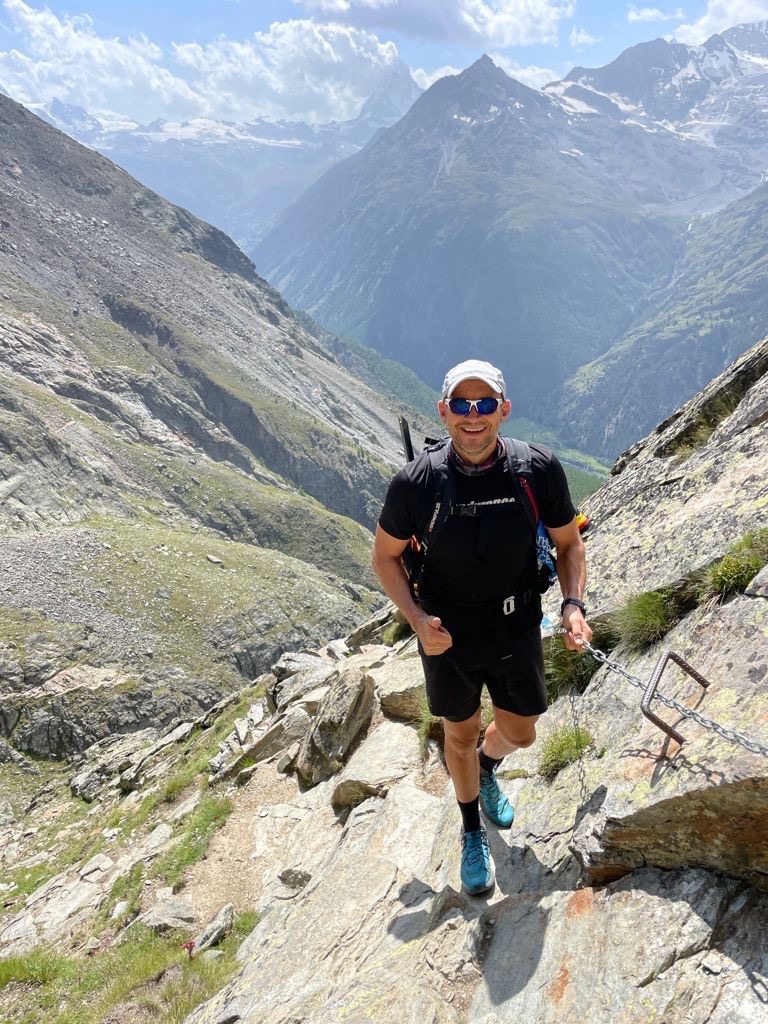 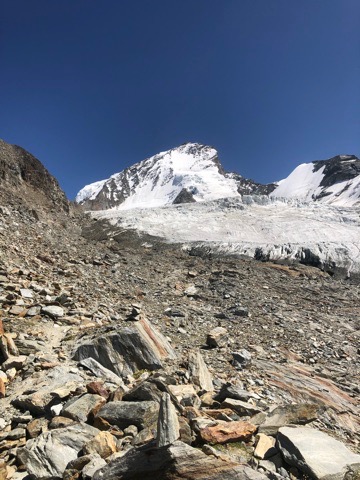 After a mediocre night of sleep and gear prep, we where ready to go at 3:20am. Our recce of the day before made the first part of the climb efficient and smooth. We soon hit the glacier which meant that we’d be roped from there on. Graham had told me the day before that our attempt would include a steep rock section to get to the ridge line (Festigrat) that – in contrary to the via ferrata – did not include any ropes. As I’m not an experienced climber, I considered this part of the route as the first challenge. As it was still dark, I could only see the part of the wall that was lit by my head torch, which helped me to not think further than the next move to make.

Graham led the climb and talked me through some of the more challenging manoeuvres I had to make. Before we knew, we reached the Hochberggletscher from where we would start the climb on the Festigrat. This was the first of many moments where Graham’s leadership made me feel confident in my mountaineering skills and helped me to comfortably push my limits. From the Festigrat we experienced a spectacular sunrise with first light on the Matterhorn and Weisshorn. 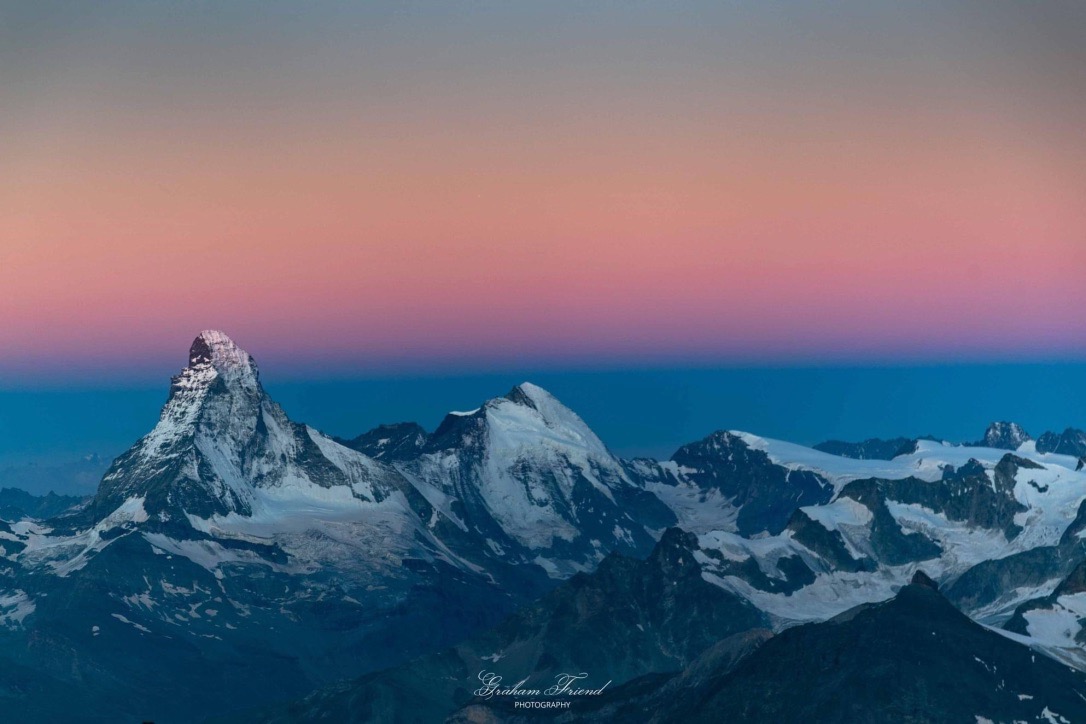 The Festigrat is the more challenging and interesting approach to the summit. The ridge includes ice and rocks which gives this route its grade PD+ (Peu Difficile +). Challenging enough for me, and according the the Int’l mountaineering standards, not a very difficult route for an experienced mountaineer.

What I have learnt over the years, is the importance of trusting your mountaineering partner. As you can be exposed to a dangerous or even hostile environment, it’s extremely important to understand each others abilities, limits and objectives. Graham felt very comfortable leading me over the Festigrat, which in turn, made me feel totally comfortable to trust him with my safety. His decision to choose for the more challenging route, meant I had to push my limitations. But never did I feel insecure. A confirmation of Graham’s confident and solid leadership. 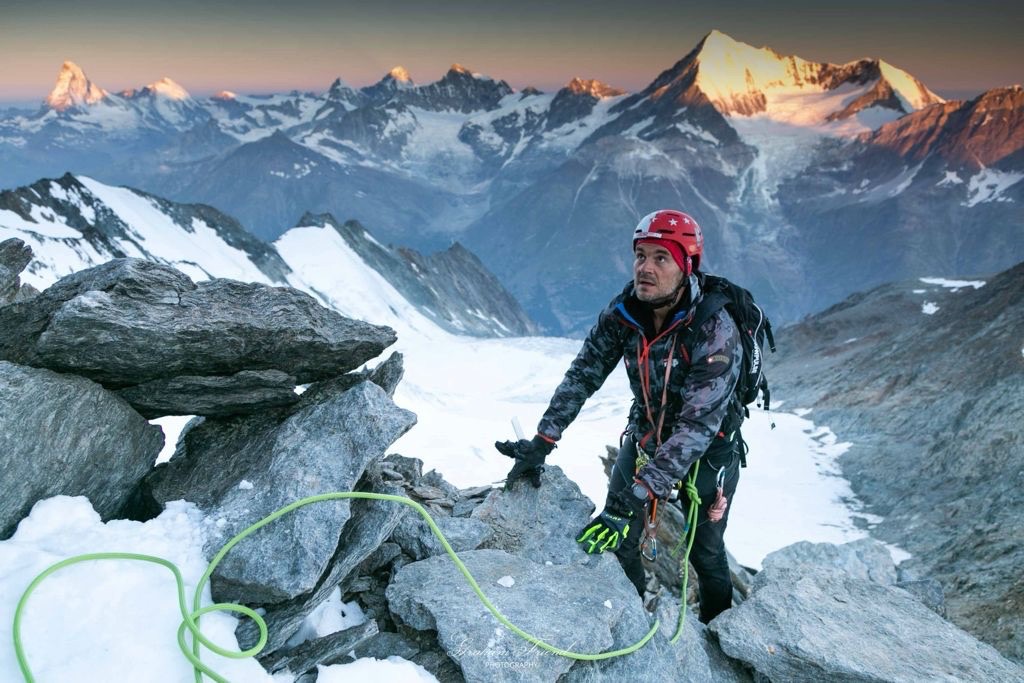 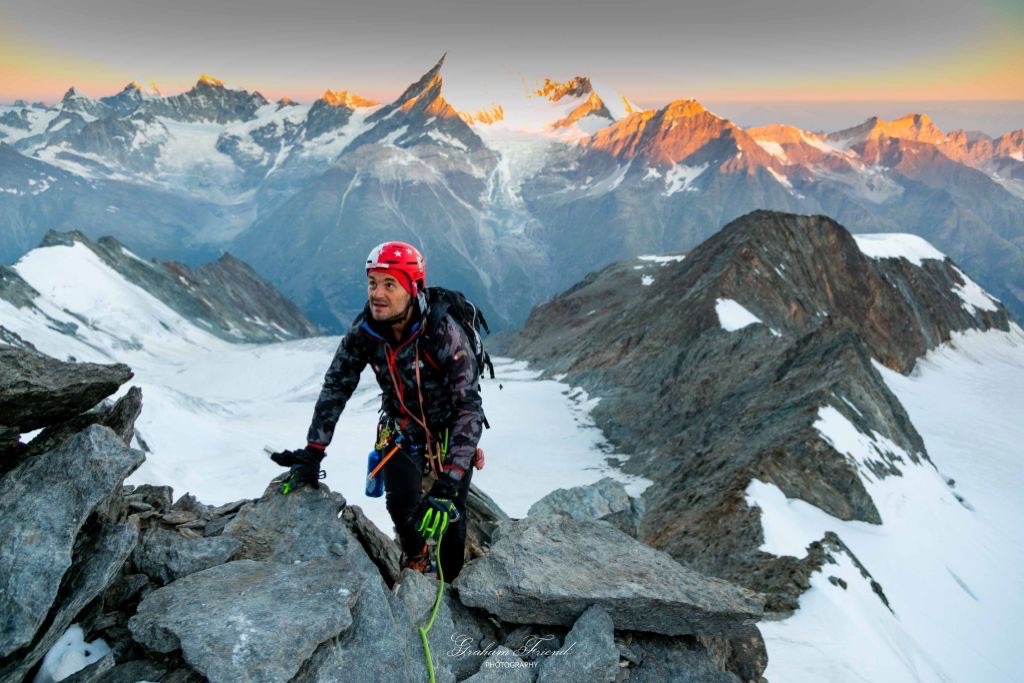 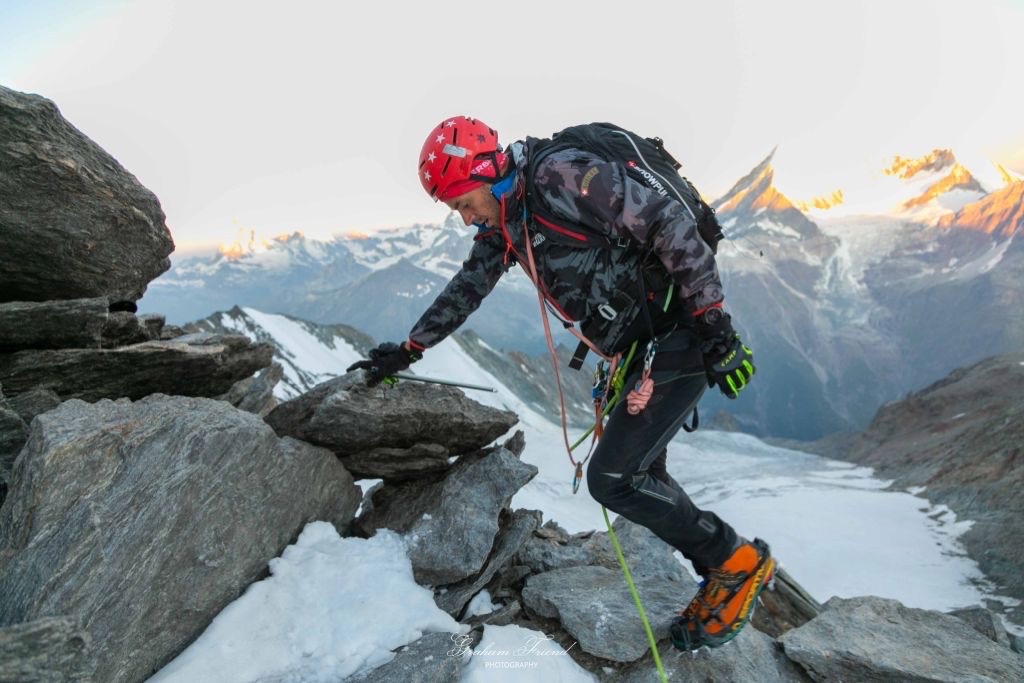 The last 250m vertical where less technical, but the thin air made it enough of a challenge. Once at the summit, we had to cross a narrow snowy ridge to reach the crucifix. It took us 6 hours and 15 mins to get from the hut to the summit – 15 mins longer than the guide book says. After spending a few minutes at the summit, we started our descend. 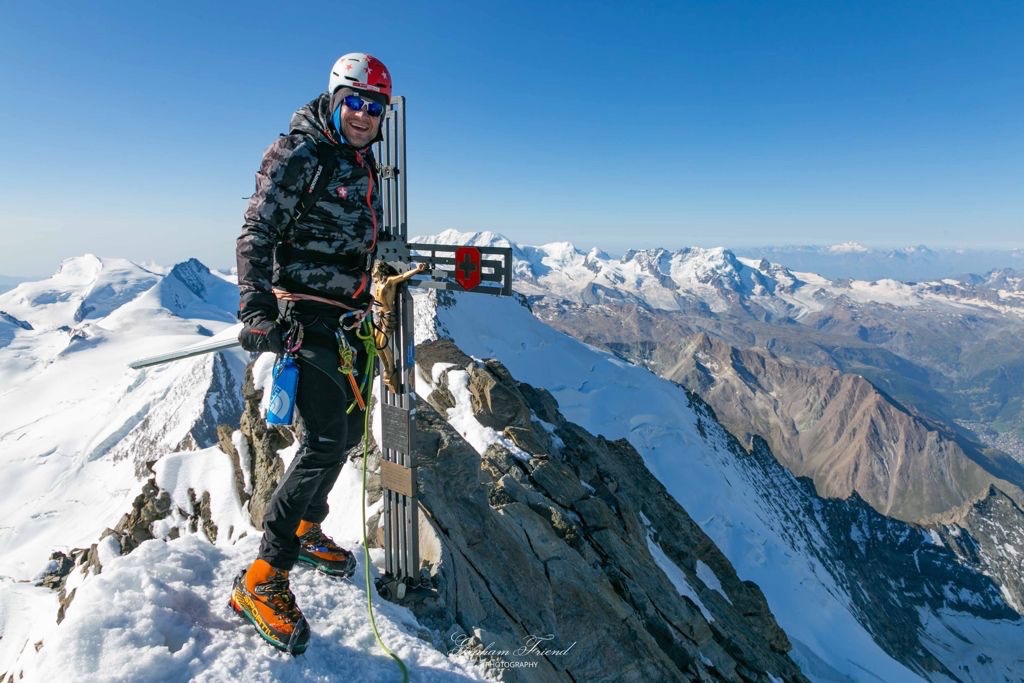 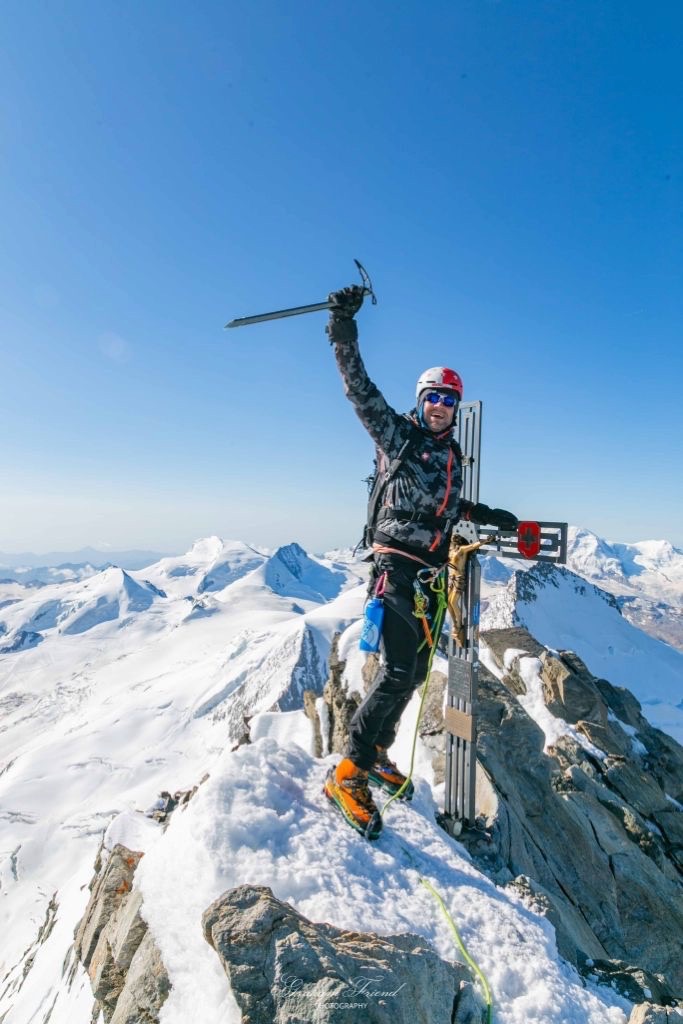 The perfect climbing conditions (sunny, hardly any wind) meant as well that the temperature started to have an impact on the snow conditions on the glacier. I led the descend which went via the longer, less interesting route over the glacier. We made good progress and – once lower and past some of the larger crevases, we shortly stopped to drink and eat a bit and made a few shots of some massive seracs. 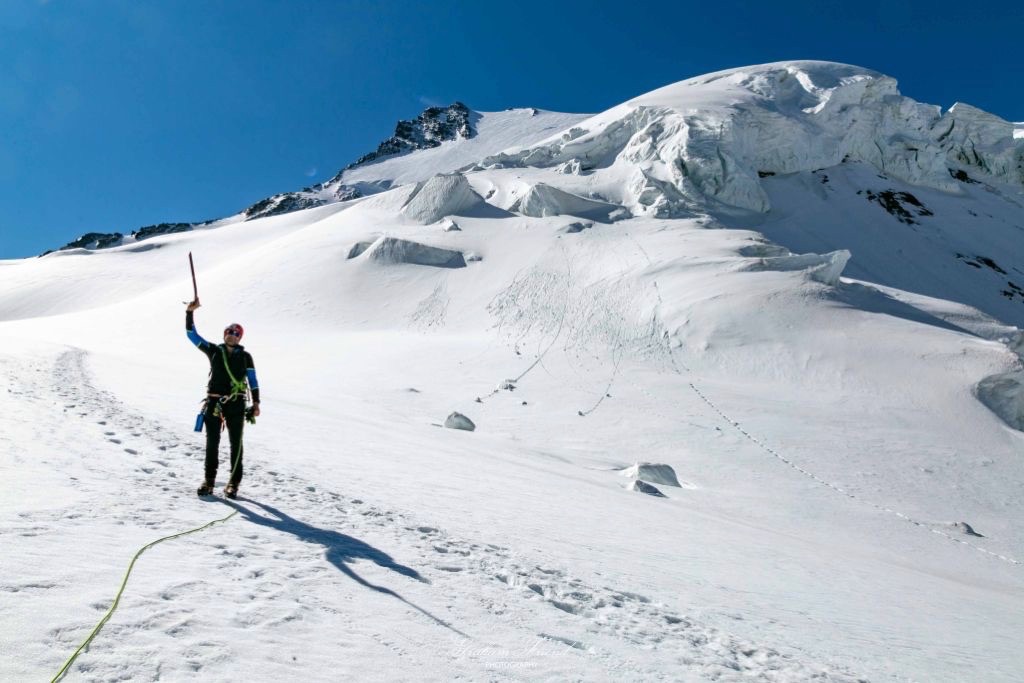 To get of Festigrat, we had to descend the band of rocks we climbed earlier in the morning. After we waited for some other parties to find their way down, we abseiled this section in 3 lengths of rope, of which the last was a bit challenging as we couldn’t find a descend route. In no way this meant I lost confidence or felt uncomfortable. 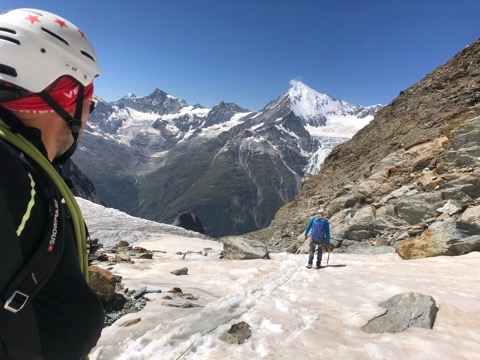 The last section went over the lower glacier and rocks and after 11.5 hours, we arrived back at the hut. After a well deserved lunch and panaché, we decided to not stay another night in the hut, and descended all the way down to the valley. A long hike down the via ferrata and endless forrest rails which in the end took us longer than the same section up a day before. Tired, but very sattisfied we drove back to our beloved Val de Bagnes where my family happily saw me back in one piece.

Some learnings I took from this trip::